This be whats goin on!

For our final project in the CoLab section of Foundations Art we where instructed to find something that was missing in Alfred (other than people, warmth, and things to do [well maybe things to do…]) and devise a way to fulfill the need. For this projects we where to work in groups that we where able to chose based on the need that we wanted to fulfill. Additionally we where instructed to construct a cart of some sort to “peddle” our solution.

My group decided to tackle the lack of Fair Trade Organic BANANAS in Alfred and the surrounding areas. we planned on doing this by first constructing a banana crate themed rolling “Bazaar” style cart, then purchasing a case of Fair Trade Organic bananas and pushing the cart around Alfred giving them out and collecting donations. 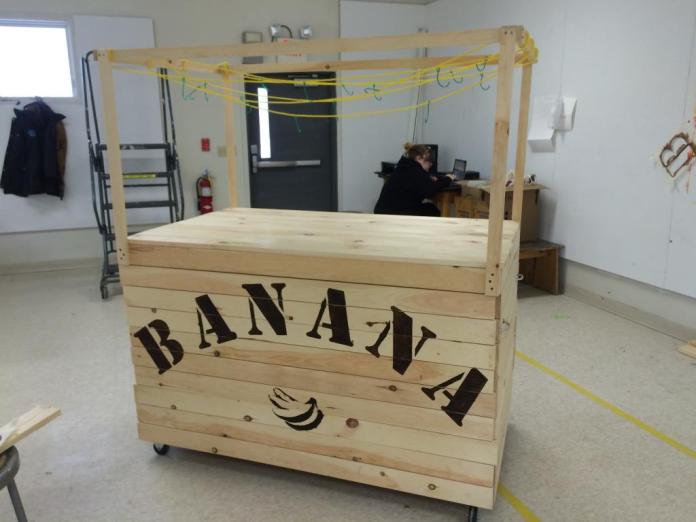 We where instructed to do a few tasks while peddling aboot in Alfred;

Q: Is their even a way for us to get these Fair Trade and Organic bananas to paddle around?

Q: Does anyone actually want these fancy bananas? If we get them, will we be able to get rid of them?

Q: Is this something that people would be willing to pay for?

Q: Is this a sustainable model that can be recreated in the future?

A: Yes, The Rouge Carrot is able to special order Fair Trade Organic bananas, but does not normally stock them in store!

A: Yes, People do like fancy bananas, in two days we managed to unload 36 POUNDS of banana! That is over 100 BANANA!

A: Yes, although we did not make a “profit” per say, we managed to recoup the cost of the bananas and can now afford a second case (Maybe).

A: Sort of, people where definitely interested, but more data is necessary to determine if i can drop out of school and pursue the banana cart full time. For the time being, I am hoping to be able to peddle some banana on hot dog day weekend, then we will see where we are at!

Originally i had wanted to track the distribution of banana over time, but found that one could not simply track a banana, and that the simply flew off our cart faster than the eye, or note taker, could see! Additionally i found that the time spent trying to track the distribution of bananas could better be spent informing people about bananas. in the end i decided the best way to track the success of the banana cart was not in confusion or double takes, but in awareness and dollars!

Tracking dollars was easy enough, we put out a donation can, people put money in it, we counted the money. Tracking awareness proved to be a bit more difficult. In the end we determined the best thing we could do was to point people in the right direction and hope they understood what we where trying to do. We did this by displaying informational posters on the Banana Cart as well as put stickers with a URL to a informational site on each banana. 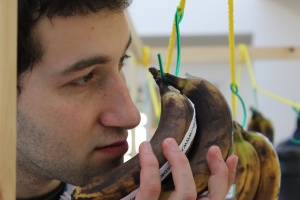